Three Minutes in a carpark 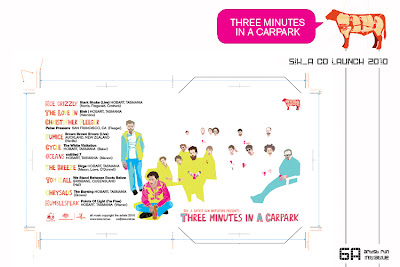 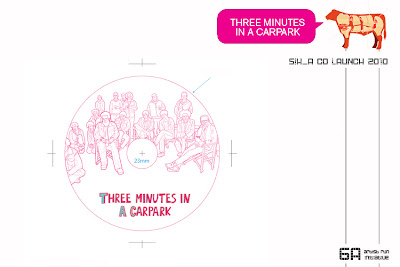 6_a inc presents… three minutes in a carpark, a collection of sounds.

I joined 6_a inc as a musician, not as an ‘artist’. I play in a couple of bands in Hobart, and I must confess we do alright – touring a bit and making the odd dollar here and there; I’ve recorded songs, some of which I thought they were quite awful, and were thus re-recorded. Ad infinitum. I still consider it a hobby, though I’ve always had that little spark of a dream in the back of my brain of becoming a ‘Professional Musician’ and of ‘Making A Living From Doing What I Love’. Music just seemed to ‘be’, existing through the constant hum of radio, gigs and records. It was normal and part of everyday life.
Art, however, seemed like a whole ‘nother world to me. It was always there, of course, I just wasn’t interested – it seemed like an elitist and cliquey paradox; the customary goon-guzzling chit-chat-chin-stroking of exhibition openings ironically grating against the ultimate question of ‘Authenticity’. Of course this was happening in my music world too, but up until the point of joining the board of an (scoff!) ‘Artist Run Initiative’ I sort of ignored this obvious fact, having the naïve view that art was for artists and music was for everybody else.
Thankfully, 6a pulled me out of this rut. It’s dynamic and exciting, sometimes overwhelming but always rewarding, and from spending time in such an environment I’ve come to the realisation that musicians and visual artists are the same animal, and that both mediums are interchangeable. The evolutionary development of arts practice dictates this: visual artists can play damn fine music and musicians can make damn fine art. Pure creativity and process replace virtuosic skill. The ‘emancipation of dissonance’ and the idea of ‘letting sounds be themselves’ replace traditional musical form and harmony.
Thus, the curtains are drawn and the interdisciplinary relationships revealed. It is through this most valuable straw of wisdom that I can now feel at ease when I call myself an ‘artist’ and my fellow artists ‘musicians’.
three minutes in a carpark features artists and musicians, artistic musicians and musical artists. All have contributed enormously to the success and general well-being of 6a, either through performances at exhibition openings or as part of the 6a Sound Festival, a curated sound and musical extravaganza that was held throughout December 2009, in a carpark. I sincerely thank all of the artists for their contributions and look forward to future music/art partnerships.